Infants with recessed jaw/ retrognathia present with unique feeding challenges and are sometimes misdiagnosed with ankyloglossia or tongue tie.  This is of particular concern, because in some cases a frenulectomy is contraindicated. Although the anterior maxillary and mandible alignment is impacted, the primary concern is the tongue sitting posteriorly toward the pharynx. In severe cases airway obstruction can occur but milder cases also require consideration for airway patency. These babes often present with stridor reflective of increased respiratory effort but when paired with a confirmed diagnosis of laryngeal or tracheal malacia adequate respiratory support needed for sustained energy and coordination for feeding are frequently compromised.

The discrepancy between the maxilla and mandible often cause the nipple and areola to compress with anterior rotation. The position of the tongue can also inhibit elevation and retraction of the posterior tongue needed to recreate adequate inner oral pressure during the suck needed to efficiently draw milk from the breast.  These oral mechanics can cause irritation to the nipple or tissue trauma or they have difficulty transitioning off of nipple shields sometimes mistaken as characteristic of ankyloglossia (tongue-tie). Many babes have improved latch in this position as gravity assists with tongue and occasionally jaw forward.

Detection of a recessed jaw can be a bit challenging.  Infants naturally have a slightly recessed chin/jaw as part of normal development; however, those that present with a gap of 3 mm or more between the anterior upper and lower gum line often struggle at breast. These infants sometimes have prominent chins with a horizonal crease between the mental region and the lower lip. The lower lip often rests tucked behind the upper lip or superior alveolar ridge. Observation at breast and bottle will also reveal increased facial tension particularly along the lateral orbicularis oris often resulting in a narrow latch as the babe tries to compensate for anterior rotation of the nipple between the upper and lower gum lines. In more involved cases the infant struggles with the extension reflex of the tongue needed for latch stability as gravity pulls the back of the tongue posteriorially.

The good news is that positioning adjustments have proven very helpful, particularly at breast to use gravity to move the tongue anteriorly in the mouth creating additional pharyngeal space. For babies without sternal precautions or poor respiratory endurance I suggest a trial with Mom reclined with babe in prone position (also known as tummy to tummy, laid back or biological position). I find most success with placing a rolled bath towel or narrow end of the Gia or breast feeding pillow at babe’s chest allow them to come down onto the nipple without head extension. The breastfeeding pillow can also provide support through the baby’s hips as they rest in a tucked position in the center of the pillow with the lower inside edge supporting their bottom. It is not uncommon to hear less stridor in this position as a result.

For bottle feeding, elevated side lying with slight anterior rotation at the hips) or high cradle (with hips slightly forward, not directly under the shoulders) can work nicely. These positions also provide nice support for respiration. I personally prefer placing babe in classic football hold but rotate their hips and shoulders so they are “stacked” which also places the babe at a nice angle with space for the bottle and supports lots of yummy eye contact/engagement.

When bottle supplementation is needed, the Playtex Drop In Nurser with the Natural Latch nipple provides nice support along the jaw when the bottle is held at a slight angle to allow the lower edge of the nipple along the lower lip.  I typically prefer this bottle/nipple for breast feeding infants to match the gape/latch that compliments oral positioning at the breast.  Research also suggests the movement of the milk within the drop in bag is similar to breast as the infant draws the milk from the nipple.

Infants with small gaps between the maxilla and mandible typically show no concerns for breathing.  However, infants with wide gaps require careful monitoring. If an infant demonstrates any stress responses in supine, parents report concern for potentially obstructive noises during sleep or the young infant spontaneously moves themselves from their back to side lying a sleep study and/or airway patency assessment should be done by an otolaryngologist (ENT). The infant’s pediatrician needs to be aware of these concerns for consideration of positioning for sleep.  Some pediatricians may consider elevated or side lying sleep positioners specifically designed for these purposes.  These should only be used under the direction of the physician.

The majority of infants with a slightly recessed jaw outgrow these feeding concerns.  At around 3-4 months of age the infant’s neck elongates and the pharynx deepens as the jaw moves forward with facial growth.  This brings the posterior tongue slightly forward with increased space allowing for functional tongue elevation and retraction.  At this point most infants can transition to more traditional breastfeeding positions. 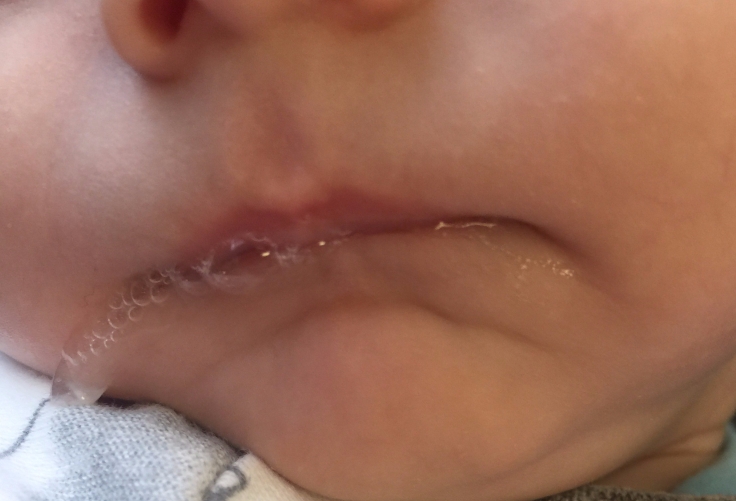